Thank you for your order!
cart.general.title

On August 31st, the Prime Minister issued Decision No.1336/QD-TTg, approving the project to replicate the model of Intergenerational Self Help Club until 2025. 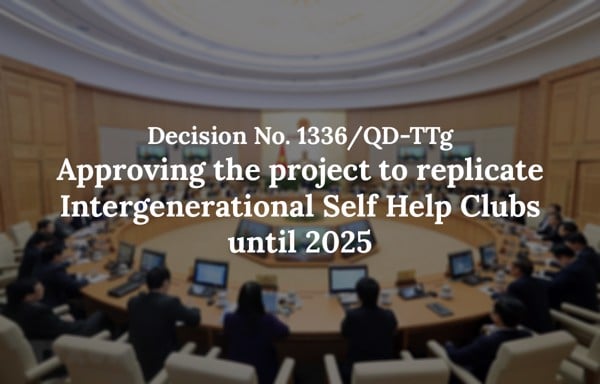 With this new Decision, the Government sets a target to effectively promote the ISHC model in order to maintain and continue the replication of the Clubs, encourage the participation of older people, as well as the Associations of the Elderly, all levels and branches of the government and communities in improving the quality of material and mental life for older people; health care, poverty reduction, contributing to building new countrysides and civilized cities and protecting the interests of older people. At the same time, the replication of the Club model will contribute to the implementation of the Government Action Program on population strategy in the new situation and the National Program of Action on Aging. Volunteer taking care of ISHC's member at their house

The Decision sets out specific targets for quantity and quality in the club model replication. In terms of quantity, the target is that by 2025, at least 95% of the provinces and municipalities in the country will have ISHCs in their communities; At least 3,000 new clubs will be built with 150,000 new members, of which more than 100,000 are older people. The Decision also directs the focus of the replication efforts to remote and mountainous areas, regions with ethnic minorities and regions with difficult socio-economic conditions. In addition, it is necessary to maintain and improve the quality of operations and manage 100% of the ISHCs built in the period of 2016 - 2020 and the newly built Clubs. In terms of quality, the ISHCs should strive to ensure the composition of membership (each Club should have 50-70 members, of which 60% - 70% are women, 60% - 70% are older people, 30-40% are young people, priority is given to people with difficult circumstances); At least 70% of the Clubs should be active in every fields and are well managed so that at least 50% of their members can get loans for income generating activities, all members are entitled to improvement of physical and mental health, raise awareness, knowledge and protect their rights; 100% of the Clubs should have a fund for income generating activities and an operational fund which is managed by the club themseves in accordance with the regulations. The ISHC helps older people in their income generating activities

This is clear evidence to show that the Government has recognized the effectiveness of the ISHC model in improving the quality of material and mental life, actively contributing to health care, eradicating poverty and increasing income, promoting social participation and protecting the interests of older people. The strength of the ISHC model is that it covers many fields of activity to meet the diverse needs of members and communities, bringing positive changes in all aspects of older people's life today and tomorrow, contributing to raising the voice of as well as including the participation from the beneficiaries themselves. The rapid growth in the number of ISHCs (nearly 3,000 in June 2020) shows that the model has met the needs and aspirations of the people in general and of older people in particular, is approved by the Association of the Elderly and is supported by local authorities. That is also the reason that the ISHC model won the Grand Prize in the Healthy Aging Prize for Asian Innovation 2020, organized by the Economic Research Institute of ASEAN and East Asia (ERIA) and Japan Center for International Exchange (JCIE) under the auspices of the Japanese government. In addition, the ISHC model was also honored by the United Nations Department of Economic and Social Affairs (UNDESA) as a good practice in the implementation of the Sustainable Development Goals. Decision No.1336/QD-TTg was assigned to the Vietnam Association of the Elderly, the Vietnam National Committee for Elderly, ministries, branches, central agencies and People's Committees of provinces and municipalities for implementation.